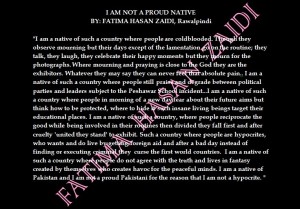 NOT A PROUD NATIVE

What are terrorists? What is terrorism? Why is there so much talk about it? Why do people fall prey to them? These are some of the questions asked by many of us. The elders try to answer them but they can’t satisfy the needs of those who have plenty of questions. These plenty of questions also arise in patriotic minds who have urge to save their land but their strive goes to vain when there is no one to support them.

Despite many warnings and preventive measures, the number of terrorism victims is continuing to increase. Most of the people who have nothing to do fall prey to these terrorists, they ruin their as well as the lives of innocents. This is an alarming situation.

Nowadays, terrorists look like religious people so no one can differentiate between a terrorist and a real religious man. These are the people who live in the world of fantasy just living with a thought of “fake paradise”. It is not just the fault of those who fall prey but also of the government because they are not providing work to these workless people who are caught in the net of terrorism. As it is said:
“Poverty is the reward of honest fools.”

The victims to brainwashing (to conduct terrorist attacks) are mostly honest including little children living in a world without luxuries. They belong to poor families wasting their precious time wandering to and fro. Sometimes this poverty leads them to be a terrorist. They take lives of those who are out to gain knowledge in educational institues or religious places like mosques. They don’t know that taking lives of innocents is a big sin. Prophet Muhammad (P.B.U.H) advised to seek knowledge even if one has to travel to china.

These terrorists have no religion but they often use the name of Islam and hence blame this holy and peaceful religion. They are brainwashed.

How our country is so easily caught in the net of terrorism? Usually people who enter our country through borders are not checked properly. They are the ones spreading terrorism, kidnapping innocent people, and providing the wrong sinful knowledge of religion. Once someone falls victim to it, it is very difficult to shake them off and revert them to a peace loving state of mind or sometimes it is very late as they have already blew themselves off. Because of this, sometimes sole earners of families are ruined and become unable to support their families. We must join our hands to maintain hope and we must try to return those honest fools a normal life. Together we all can do it. We should all contribute to make our beloved country Pakistan a peaceful and prosperous country.